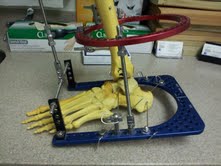 The day is finally coming.  I go in for surgery on Wednesday.  Thanks to Dr. S. Robert Rozbruch and his staff at the Institute for Limb Lengthening and Reconstruction at The Hospital For Special Surgery, I will emerge from surgery looking as if I am part robot.

My saga began when I broke my ankle in 1990.  I was fine, although as the years passed I was having trouble running on the tennis court.  After many MRIs,  I found that arthritis was the culprit for all my pain.  There is no cartilage left between my joints in my ankle and foot.

Getting steroid injections helped temporarily but at the risk of destroying any good bone I had, it was necessary to limit these to when I was absolutely desperate.

Limping became a way of walking for me.  The pain was increasing. I was limited to a few shoes which did not make my foot feel worse.  Some days I could barely put my foot into a shoe.

Time passed.  Out of desperation I contacted many orthopedists.  After each visit, I was told the same thing:  I needed a foot fusion.  I even had a well known orthopedist in LA look at my MRI and had the same conclusion.  Then there was the orthopedist who had taken care of some famous ballerinas.  He said the same thing.

I was lost, out of options.  Then one day I was at the physical therapist at Access Physical Therapy and Wellness in Armonk, NY discussing my pain.  He mentioned Dr. Rozbruch and suggested that I had nothing to lose by calling him.  I emailed the doctor and in five minutes he responded and told me to come see him.

Months later and I am about to enter into a fairly new surgical procedure where I wear a frame with pins, rods and screws for 12 weeks waiting for magic to happen. This is how the surgery is described: A right ankle distraction arthroplasty; application of an SBI RAD frame, Right illac crest bone marrow aspirate and distraction of the hindfoot.

The joints are opened, holes drilled in the bone to bleed and form scar tissue, then my stem cells are injected into the joints and we hope that cartilage will grow.  Apparently when the joint is forced open that action may prompt the body to start growing cartilage.  I am hoping that all goes according to plan but nothing is guaranteed.

The frame then gets removed after the 12 weeks and then I spend the next 3-6 months doing physical therapy.

And I can't drive those first 12 weeks.  I will be at the mercy of those who call to offer an escape plan.

I will be writing updates for anyone else considering this surgery.

Where to see more info:  www.LimbLengthening.com

Where to go for Physical Therapy:  www.AccessPTW.com
Posted by ShelleySays at 7:25 AM

It sounds really intense. Stay strong and power through it!

Shelley I'll be thinking of you. I hope you have books, computer, TV, Netflix, On Demand and of course a cell phone in bed with you.

There was a boy at KES who had surgery to lengthen his arm. He had those things sticking out, and every month or so they would tighten the screws and force his bones further apart to force bone growth. It was a success, but aarrgghh.

I think lifestyle has a lot to do with whether these surgeries succeed. Don't smoke, don't drink, and eat the best diet you can - it really will make a difference! That won't be hard for you.

Please keep us posted on Facebook. Have Lee take some pictures! I'm sorry you have to go through this, but theoretically it will be EXTREMELY worth it!